Are you a girl? Do you like wearing a dress, whether it is prom dress or evening dress? If it is, do you know the history of women’s dress or fashion? However, if you don’t know or know a little, it doesn’t matter, today, Lalamira will show you learn more women’s fashion history so that you can know dress trend better.

The fashion of the 1840s was characterized by low and slanting shoulders, a low and pointed waist, and bell-shaped skirts that grew ever more loose over the decade. Evening dresses for women are often dated. The hair is separated in the middle, with small rings on the side of the head, or rings around the ears, curled in a bun at the back of the head. A paisley or crochet shawl is a stylish accessory, as is a linen hat with lace ruffles for the interior and a large hat for the exterior. The collar of the coat is very popular. 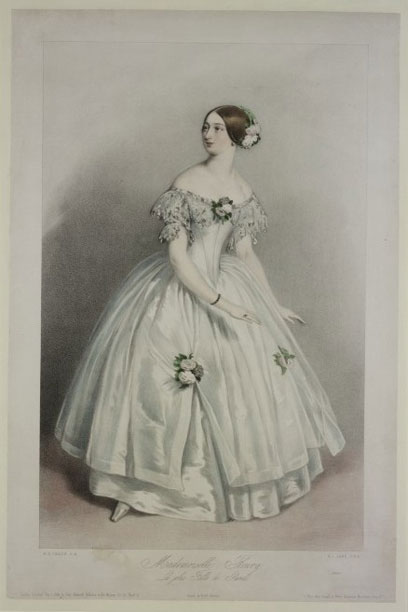 In the 1850s, women’s dresses were domed bell-shaped, supported by petticoats. They usually feature deep ruffles or layers. Long bloomers and trousers with lace are popular. Layered cape jackets are popular, and paisley patterned shawls are also popular. Wearing a deep hat, hair is rolled into a bun or side loop, separated from the middle. 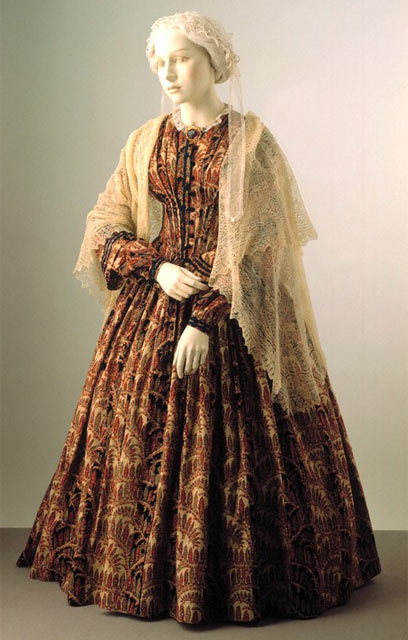 Women of the 1860s featured a turtleneck bodice and button-down front. White lace is popular with collars and cuffs, and low diagonal shoulders are also popular, they open wide sleeves. The skirt remained full bell-shaped until about 1865 when it began to lose volume in the front, and the center of gravity moved to the rear. The hair is put on, the middle part is tied to the neck behind the low bun, with a ring or small ring to cover the ears. Late decorations include wreaths, ostrich feathers, pomegranate flowers, wheat and butterflies. 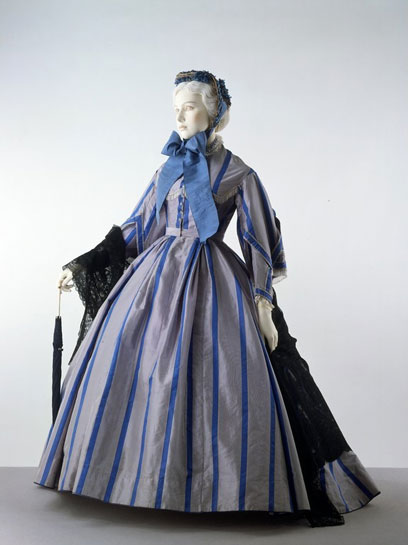 In the 1870s, women’s fashion emphasized the back of the dress, with long hemlines and fabric busted with flounces and pleats. The waistlines of the 1870s were lower than those of the 1860s, with Slender, tight bodices and flattened front skirts. The low square neckline is popular. Hair from the back high draped, intricately curled, draped to the shoulders, decorated with ribbons, ribbons and decorative Combs. The hat is small and tilts forward to the forehead. Ten years later, people also wore wide-brimmed hats, though still leaning forward. 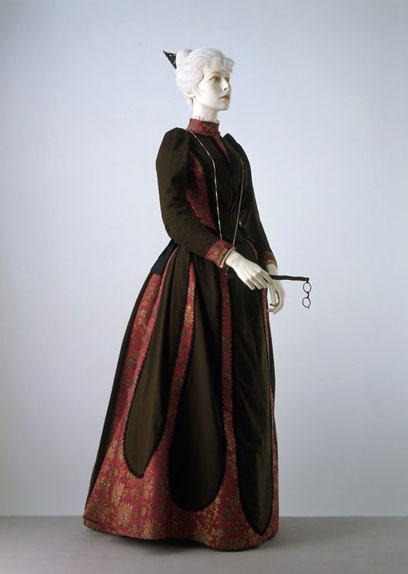 The 1880s womenswear was characterized by a tight bodice with narrow sleeves and a high neckline, often decorated with white ruffles or lace at the wrists. At the beginning of the century, the emphasis was placed on the back of the skirt, featuring ruffles, flounces and embellishments such as bows, heavy, rich fabrics and edgings. Mid-decade, the hustle briefly revived, overly exaggerated, and the hips protrude from the level of a small part of the back. 10 years later, the hustle disappeared. Hair is worn on the top of the head, curled tightly. Hats and caps correspondingly small and neat to fit the top of the hairstyle. 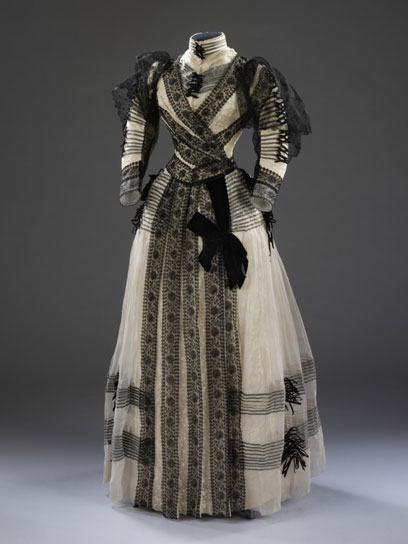 Early in the decade, women wore tight tops and high-necked narrow sleeves, as they had done in the past decade. However, from about 1893, the sleeves began to swell into the shape of the leg of the Lamb, the lower arm tightened and the upper arm bulged. Off-shoulder long dresses are stylish, and the horizontal trim on the bodice further exaggerates the lines. The dress was worn as a straight, simple line of length. Male styles and cuts are gaining in popularity, and women sometimes wear shirt collars and ties, especially when playing golf or going for a walk. The hair was worn high on the top of the head and curled very tight. The hat is small or wide and has a lot of decoration, but is usually worn on the top of the head. 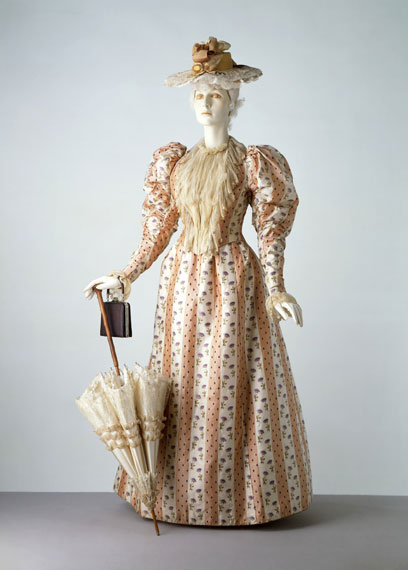 T-shirts were popular in the early 20th century. It pushes the hips back and pushes the chest forward to form a stylish dove shape, highlighting the fluffy frill top, usually decorated with a lace collar and a wide ribbon tie. The dress is popular and attached to the hips, the hem has grooves. Hair is separated in the Middle, usually around the mat, wig around the hairline to form a wide “edge” this hairstyle is worn in a wide, low crown, broad-brimmed hat decorated with flowers, lace, ribbons and feathers. 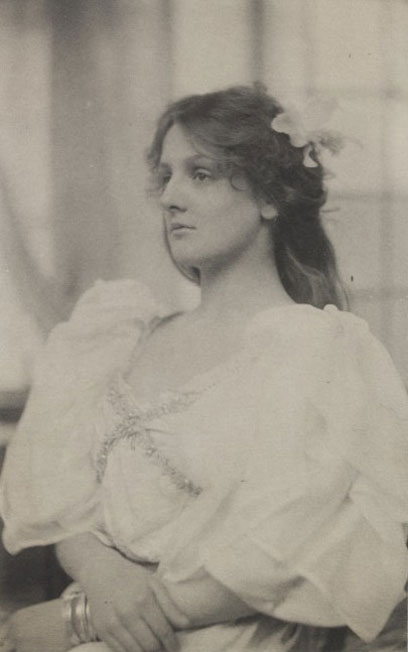 In this decade, frills, fluffy tops, and fluted skirts continued to be popular. A slightly tall waist is popular, as is a long tunic was worn on the ankle. During the first World War(1914-18), women wore practical overalls, and sometimes uniforms, overalls and trousers. Hair is separated in the Middle, usually around the mat and wig around the hairline around the formation of a wide “edge.” This hairstyle is worn under a wide hat with a shallow crown decorated with flowers, ribbons and feathers. Almost 10 years later, young women will wear short tops. 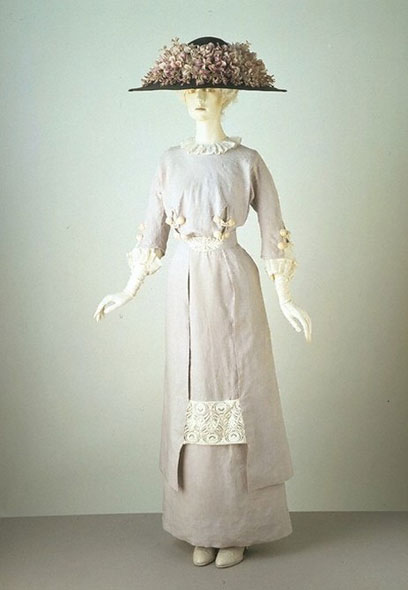 In the early 1920s, women wore high-waisted, tubular clothing that was fashionable, and tunic tops were also popular. In 1920-1922, however, the waistline fell to the hip level, blurring the natural curves of the tubular, androgynous appearance. The young, very stylish “flutter” wears knee-length skirts with neutral-colored stockings and brightly colored garters. For ten years, the skirt has fluttered between the ankles and the calves. The jewels are very conspicuous, including large brooches and a long string of pearls. Hair is cut short, sometimes close to the head, unique bell hat (a close-fitting Bell hat) is very popular. 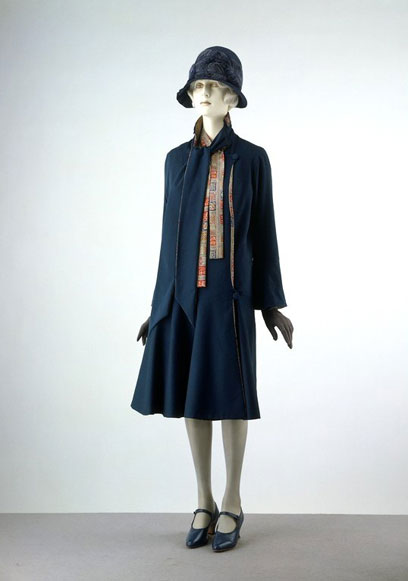 In the 30s of the last century, drooping hermaphrodite on the waist gave way to slimmer femininity. Parisian fashion designers introduced slanting cuts in their designs, which allowed the fabric to brush the curves of the body. Long, simple evening dresses made of satin are popular. These clothes usually have a low back. During the day, people wear wool suits with shoulder pads and fluted knee-length skirts. Fox fur shawls and collars are popular, and small hats decorated with feathers or floral details are also popular, worn at an angle. The hair is cut short and close to the head, and there is usually a gentle“finger wave” at the hairline. Sports and beachwear have influenced fashion, and the sun is coveted for the first time. 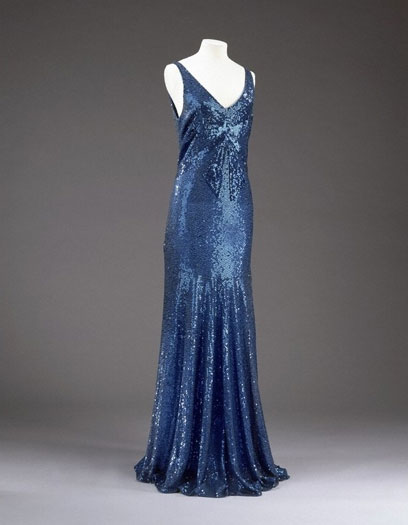 The result of the war was a severe fabric shortage, which lasted until the end of the 20th century. The dress is made with a minimum of cloth, few pleats and no trim. Skirt slightly below the knee, straight, wearing a square jacket and wide shoulder pads. Many men and women wear uniforms. Since 1942, some clothes have been made under the Government Utility Program, which rationalizes the materials. They can be identified by the ”CC41″ stamp, which is an abbreviation of the “civilian clothing act of 1941”.During the war, accessories were important because they were relatively cheap; high platform shoes or sandals, and high flower hats were popular. The hair is left very long, with stylish waves and curls on the head. In 1947, Christian Dior launched his “new look”, revolutionizing the fashion of the 1940s. Skirts become longer and fuller, square shoulders become soft and slant. The waist is tightened and the cap is widened in the form of a saucer. 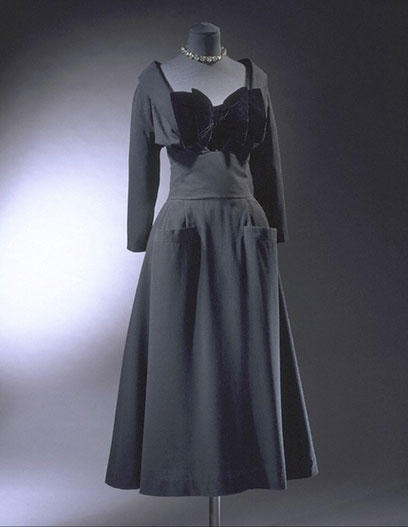 The 1950s continued the style of the late 1940s, with the skirts very plump, the waist tightened and the shoulders tilted. Another popular silhouette is the look of a narrow pencil skirt. Daywear includes skirts and jackets, or daywear made of Tweed and wool. Pencil skirt or maxi can be seen in plain fabric or print. Single products are very popular, especially the waist sweater. The hat is either a small pillbox style or a large saucer hat. The hair is usually cut short, rolled into curls, or left very long, with a simple bun or ponytail at the back. 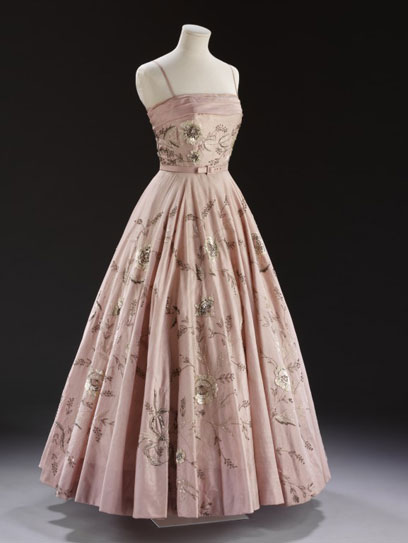 The income of young people reached the highest level since the end of World War II, which generated a desire for a wardrobe that was not just a simple imitation of adult clothing. Designers like Mary Quentin and Bibi offer clothing specifically for young people, in which the mini formal dress is the most distinctive presentation. Women wear a light foundation and use Cole, mascara and false lashes to accentuate their eyes. The hair is long and straight, either Bob-shaped or wedge-shaped. For nearly a decade, the hippie movement from the west coast of the United States emerged as an attempt to borrow colors, patterns, and textures from non-Western cultures. Older or more conservative women still tend to wear skirts below the knee, with tailored jackets, coats or woolen sweaters. 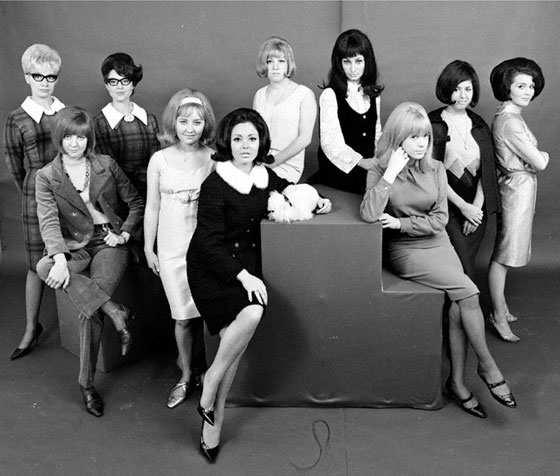 Throughout the 19th and 20th centuries, the history of women’s fashion, from the skirt, there is also a great change. From the low-shouldered evening dress of the 1840s to the mini skirt of the 1960s, the evolution of this dress style and form also reflected the progress and development of people’s thought life at that time, it is the interpretation of the evolution of the Times. Of course, when we are in 21 centuries, wonderful revolutionary times, we can get a dress easier and faster because of the development of the internet and delivery. However, there are still many girls can not decide which dress is better for them, whatever is used for. Lalamira not only introduces some history of women fashion for you but also offer some evening dresses trend 2020 you are seeking for a long time. From long to short, ball gown to mermaid, a-line to v neck, and so on. We believe whatever you dress up we recommend, you must be happy and own a memorious night or party.

For fashion, there is no limit, even when we are in 21- century, we also can wear vintage dresses to attend the party or formal event, and it will show your elegant appearance and smart style among your contemporary friends, Recently, many girls rather than choose old-times prom dress to take part in their activities. We can not deny that they are eye-catching and mindful. Finally, we will repeat to fashion, “what’s the fashion?” if any girls think when they wear a beautiful dress they can show themselves and be happy, it is fashion because there are different definitions in every girl’s mind. We can not force to ask someone to obey those principles. To the end, welcome to Lalamira!

As a company founded more than 10 years, LaLaMira provides many dedicated dresses for world consumers, our purchaser’s are from the U.S.A., Canada, Europe, and Australia, etc. over one hundred countries worldwide. Read More

3 Suggestions About Your Wedding—— 1.How to Choose Bridesmaid Dress?

How many of these historical stories about wedding dresses do you know?

The trend of retro backless Prom dress is back! Come and choose!